In the first part of our UNESCO series, we covered two amazing, must-see places in China – the Great Wall of China and Nine Villages Valley. With over 50 sites in China officially recognised as World Heritage Sites by the United Nations Educational, Scientific and Cultural Organization (UNESCO), there are plenty more to discover.

Here are three more UNESCO-recognised sites you may also want to see on your travels: two of which you may have heard of, and one less well-known but equally beautiful one.

Huge, fluffy, lazy, mischievous and extremely adorable, the giant panda is as loved overseas as it is in its home country. As both China’s national animal and an endangered species, it’s also highly protected, and a lot of effort goes into preserving them.

Rather than being located in one place, the Sichuan Giant Panda Sanctuaries are made up of seven nature reserves and nine scenic parks in the Qionglai and Jiajin Mountains, covering 9245 km2. Together, the sanctuaries are home to over 30% of the world’s giant pandas.

Giant pandas can spend up to 16 hours a day eating, and need at least two types of bamboo in their diet to keep healthy. But although it’s their main source of nutrition, bamboo isn’t the only thing they eat. They also enjoy the occasional fruit or vegetable, and even a little meat from small rodents and reptiles.

Located at the heart of the Imperial City of Beijing, the Forbidden City was built from 1406 to 1420 based on the location of the North Star, which was considered to be the centre of heaven. So it was only fitting for the emperor – considered to be the son of heaven – to live in a place of such cosmic importance.

The Forbidden City was the political centre of China for over 500 years, spanning over two dynasties (Qing and Ming). And it was home to 24 emperors in total, along with their families and servants.

Translating literally as ‘Fujian earthen structures’, Fujian Tulou are huge structures built by the Hakka people between the 15th and 20th centuries. They were several storeys high, and could house over 800 people per structure, making them like mini self-contained villages. While there are a variety of ‘tulou’ in China, Fujian Tulou in particular include 46 sites.

While the outsides of these structures looked plain, the insides of them were built for comfort and often gorgeously decorated.

The earthen building materials and shape of Fujian Tulou made them perfectly weather-proof for their residents: cool in the summer, and warm in the winter.

Want to learn more about China’s rich history while experiencing the country itself? Click on the ‘Cities’ button at the top of Lingoinn’s homepage to see all the different places you can book a homestay with us in. 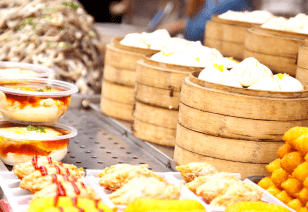